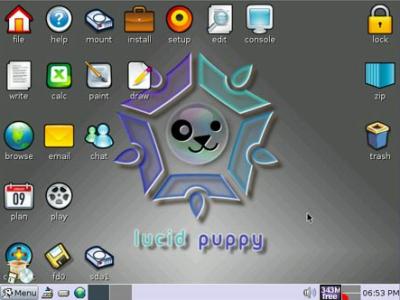 If you are looking for a light weight, and fast Operating System for your older or slower computer which previously ran Windows 98 or XP, or Vista. Puppy Linux would be the perfect operating system for you since you can run Pupply Linux on most computers with 128MB of RAM or less. You can run Puppy Linux from a CD, or use a program like UnetBootIn to easily make a USB bootable version of Puppy Linux from the Puppy Linux ISO file. The ISO file is also about 100MB, so you can run PuppyLinux off of a older USB Flash Drive which is 128MB in size, or burn Puppy Linux to 650MB CD-R disc unlike other Linux distros which require a CD-R with 700MB of storage space. This also means you can burn PuppyLinux to those mini CDs with less storage space.

The best feature I like for Puppy Linux is everything like sound, video, internet, and programs work after Puppy Linux has loaded, and if you have a hard drive on your computer, you can save your Puppy Linux settings and files, so you don’t lose them after you power off or restart your computer like other CD based Linux Distros. You can also save your personalize Puppy settings to the same USB thumb drive or internal hard drive you have Puppy Linux installed on. The ave file name is called  pup_save.3fs which is used to store your settings, programs, and other Puppy related info. The file is made  right after you shut down Puppy, and it will update the settings and file after you shutdown the computer the next time. This means wherever you go, you have a copy of Puppy Linux, and Puppy Linux settings and third party software which you installed on it. It is like having a personal computer in your thumb drive which you can boot from on any computer which can start from a CD or USB Flash drive. You can also save new  files, or store your personal files on Puppy Linux bootable USB drive and access your saved files, add new files, or modify existing on Windows, Ubuntu, or Apple Mac (if you formatted your Puppy Linux flash  drive in FAT32 file format).

But, I notice if a network card driver does not work on Puppy, it can be hard to fix for beginners, and you are better off finding a new computer which works with Puppy Linux, or buying a new network card to install on your PC. This problem is very rare since Linux works on a lot of different Network card brands and models.

I have used Puppy Linux in the past on older computers, and it works great in my experience. I like how fast Puppy Linux loads for a Linux based LiveCD operating system. If you have enough RAM like 128MB or more RAM, Puppy Linux can copy itself to your RAM, so when you are using Puppy Linux, programs and files run very quickly.

I tried Puppy Linux on a older 1.7GHz computer with 256MB of RAM, and it worked pretty well. On a newer dual core 1.86 GHz CPU with 1 GB of RAM, Puppy Linux starts up in under a minute, and runs super fast. For the fastest boot experience in Puppy Linux, I recommend using UnetBootin to make a bootable USB version of Puppy Linux to run from a USB flash drive, or SD card with a fast read and write time since Flash memory is faster then CD and DVD drives.

You can also run more programs, and files at the same time when multi-tasking in Puppy Linux on a computer with 256MB or more RAM since PuppyLinux uses less RAM.

The user interface for Puppy Linux is also very simple to use if you used other visual based operating system like Windows, Ubuntu, or Mac. The shortcut icons, and  program menu are very easy to understand since they have symbols and labels on the icon which are related to the category of software.

It also has most of the software you need for Word Proccessing like AbiWord, Mplayer for media playback and Web Browsing with Firefox, Chromium, Seamonkey, and Opera.

If you pick  Chromium as your default web browser, Adobe Flash Player would work without the need for secondary plug-ins since Chromium has Adobe Flash player built in. This means you can play YouTube videos in Chromium without the need to install third party plug-ins. You can also watch HTML5 videos if you enable HTML5 on YouTube by going to YouTube.com/html5. With the latest version of Puppy Linux, I can watch HD videos in 1080P or 720P resolutions without any lag on YouTube with Chromium.

It is also easy to install 3rd party programs like VLC with the Puppy Linux program installer program.

Other uses for Puppy Linux is to use it for a thin client which runs programs, and files off a server rather then on a desktop hard drive, or use Puppy Linux as a virtual machine software to run multiple operating systems on the same computer since Puppy Linux use so little RAM which means there is more RAM available for your virtual machine. You can also run Puppy Linux  without any slow down in a Virtual Machine software like VirtualBox, VMware, Qemu, or Virtual PC 2007 in Windows , Linux or Mac since Puppy Linux use less RAM and CPU cycles compared to other operating system.

You can also install Linux native games in Puppy Linux for even more enjoyment when you have access to a PC which you can use to boot Puppy from.

You can download your copy of Puppy Linux at puppylinux.org

CdBurnerXP, Nero, Roxio, and other CD-R burning software could be used to burn PuppyLinux to CD-R.

UnetBootin is a good program to use to make a USB version of Puppy Linux. You may need to mark the drive as active in the Windows Command Prompt. My tutorial on Making a USB startup OS install/Live drive in Windows or Linux with UNetBootin will teach you how to use UnetBootin.