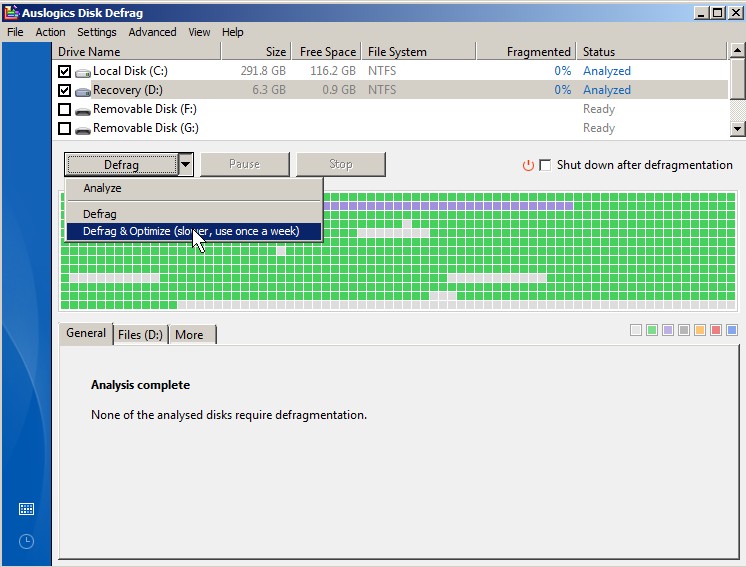 Windows Disk Defrag sometimes takes a long time to finish. I notice there is very little you can do to speed up disk defragÂ  in most cases. I’m usually stuck waiting for the little progress bar to reach the end of the bar, and watch those little squares, or lines being moved around on the disk defrag program which can be very slow and boring. It is ironic how slow disk defrags are, but without doing disk defrags your computer hard drive will open files slower which means windows will feel slower then usual the more your hard drive gets fragmented by files being located all over your drive causing your hard drive read and write head to move more while your drives spin.

We all probably heard people say, “Disk defrags can improve Windows performance”, but how many people know how to speed up and improve disk defrag performance?

I recentlyÂ found a few simple ways to speed up the disk defragÂ time by reducing the amount of fragmented files on my system hard drive partitionÂ to defrag andÂ increasing my free availableÂ Â system resourcesÂ  forÂ doing my disk defrag faster.

1. Do a disk clean up with CCleaner, or Microsoft Windows Disk Cleanup utility. By doing a disk clean up, your computer will have fewer small files like temporary internet files, temp files, and junk files to defrag. Uninstall software, games, and add-ons to software like web browsers which you never use since software, games, and add-ons/plug-ins for software can take up a lot of space. Consider removing your older system restore points since they can take up a lot of space. CCleaner has a system restore and program uninstaller found in its toolsÂ  section. You can also disable startup programs from running in CCleaners tools section.

While you have CCleaner or Glary Utilities open, you might as well scan for invalid/junk Registry keys since they can take up space on your hard drive. Backup your registry keys before you clean them up. Glary Utilities does it automatically, and CCleaner ask you if you want to back them up.

3. Do a scandisk of the drive you plan to defrag by going to Computer and right clicking the drive picking properties > tools and check now. I don’t recommend checking your drive for surface errors on a regular basis since it takes very long. You should do it once a year or whenever you feel your drive is acting very strangely.

5. Upgrade to a faster Hard drive with more space, bigger cache, and faster rotational speeds for your drive. But, make sure you buy the right kind of drive type and size like IDE, SATA. Desktop computers usually use 3.5 inch drives while laptops and Netbooks use 2.5″ size drives.

If your hard drive is acting weird or makes loud annoying sounds, don’t defrag since it won’t fix your problem, and your hard drive might break. I recommend backing up all your un-backed up files and installing a good hard drive which is working properly in your computer.

7. If your computer drive is not very fragmented, learn Â How to only defrag fragmented files in Auslogic Disk Defrag saving you timeÂ .

8. Make sure your drive have at least 20% of it’s space is free space like if you have a 100GB drive you need at least 20GB of free space for your computer to defrag properly.

9.Restart your computer to refresh your memory andÂ Â close all programs you do not need anymore during your disk defrag like web browsers, word processors, e-mail clients, media players, system tray programs, desk top widgets,etc Â and don’t use your computer. This will let Windows give more system resources to your Disk Defrag program to finish defragging your computer, and you won’t be adding new files to your computer by using it since every time you go on the internet, or use a program it downloads or create temporary files in the Temp folders on your drive.

You may want to temporarily disable scheduled tasks in Windows Task Scheduler, virus scans, spyware scans, and backup software since these programs uses a lot of hard disk rotational resources, or you can pick a day when you have no schedule tasks to do for your disk defrag.

You can also temporarily disable your screensaver until your disk defrag is done.

You can also right click your Task bar and pick “start Task manager” and manually “end processes” for running programs, but not all processes since they are needed by Windows like Explorer.exe,Â  winlogin.exe, crss.exe, antivirus, firewalls, taskhost.exe, etc.

10. Set your computer to shutdown by using Auslogics Disk Defrag auto-shutdown function. It won’t speed up your disk defrag, but it will notÂ  affect you as much since you can just leave your PC on and let it defrag while you are not using your PC like when you are sleeping.

I also like to make a point of not defraging flash memory like USB flash drives, SD cards, and solid state memory since it is not needed and you’ll wear out your Flash storage drives eventually. Defragging your solid state drive will not speed it up or improve reliability.

Your Disk Defrag speed upÂ results may vary on how much faster your disk defrag are since disk defrag completion speed depends on the percentageÂ of your hard drive’s filesÂ are fragmented, the speed of your computer, how much free system resources like hard drive space, free ram, free CPU cycles, are available for use, etc.

But, this guide should make your disk defrags faster if you follow all my steps including the extra steps which are optional.