Netbooks are slower then laptops and desktop computers made in the same year, but people still use Netbooks for listening to music, watching movies, and short online videos. However, some multimedia software uses more system resources then other multimedia software when playing music songs and Â videos. There are some multimedia player which have fancy and nice looking themes which use more system resources then multimedia players with plain themes.

When a computer uses too many resources because you are running too many programs or using programs which uses too much of your Netbooks Hard drive,Â RAM and CPU resources, your music might skip, and your videos frame rate will be slowdownÂ like you are watchingÂ a slowÂ animatedÂ flip book.

The worstÂ kind of multimedia player for slow Windows computers like NetbooksÂ isÂ multimedia players which loads itself during Windows Computer startup, load services automatically, have a lot of animations, bloated user interface, special effects, visualizations, and plug-ins you don’t need to open music or videos.

In this post, I will introduce you to low system resource media players which has all or most of the features you need for playing back your favorite song, and video files without making your Netbook very slow.

This guide for picking low system resource multimedia players for your netbooks Â also works for slower computers or laptops which run on Windows 7,Â XP, Vista, and belowÂ which have a slower CPU like a Intel Pentium III orÂ CeleronÂ and very little RAM like 256MB-512MB.

It’s user interface is very simple, and from my experience. I can’t really tells it is running in the background. It does not slow down my computer usage on my computer. The user interface is also very clean and plain. VLC can also play almost any video and audio file format available today on the internet. It also has the ability to load multimedia playlists. VLC uses very little disk space. VLC also takes up very little screen space which is important when you are using a 7″-10″ screen on a netbook.

Also check out Media Player Classic and GOM PlayerÂ  since they are great players, too. 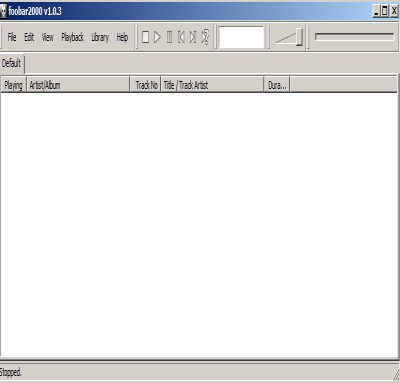 Foobar2000 is a great little Music player which can open all the popular music file formats like MP3, MP4, WMA, wav, ogg, etc. It also has the ability to save and load song playlists. It only takes a second to start up Foobar2000 in Windows. There is almost no loading time when adding files to your playlist and playing songs. Foobar2000 also use very little disk space and system resources. The user interface is very plain, buy simple to use. Foobar2000’s window is resizeable to use as much or as little screen space as possible, so it won’t crowd up your smaller monitor.

Speedbit VideoAccelerator is a small program which runs in your system tray in Windows. VideoAccelerator will speed up your video loading time on Flash Video sites like Youtube, Google Videos, Facebook, Myspace, Veoh, Dailymotion, etc. Netbooks are designed for going online, so you will most likely spend a lot of your online time watching flash video on Youtube. But, if you are on a slower connection, watching videos on Youtube can be very slow and frustrating. When usingÂ Speedbit when watching Youtube videos, you will experience zero or fewer pauses compared to a computer which does not have Speedbit. Speedbit also runs in your system tray, and uses very little system resources, so it should not slow down your computer.

If you need a codec for playing back a cetain media file or can’t play a certain video file, I recommend Kazaa lite Codec pack.

Plug in Netbook or Laptop for better performance

I also recommend plugging in your Netbook or Laptop when you are near a power outlet since Netbooks and Laptops throttle down/slow down its CPU, GPU, and other system components to save battery life, but this also can make your laptop and Netbook slower when running of itsÂ battery.

If your netbook still feels kind of slow when playing back media files, consider changing your computer to the windows classic themes and disabling animations for your desktop learn how to do it at support.microsoft.com/kb/294309Â  or Follow the tips for Vista windows.microsoft.com/en-ca/windows-vista/Optimize-Windows-Vista-for-better-performanceÂ .Â Optimizing Windows 7Â should be the same for Windows Vista or very similar.

I also recommend closing programs which you no longer are using, or plan to use later like Office suites, Games, Photo editing software, and other types of software. Your battery life will also increase when fewer programs are running in the background since your netbook computer will be using less computer resources like memory, and CPU cycles.

You can also think of defraging your hard drive if your computer is getting slow after copying , making or downloading a lot of media files to your Netbook: Speed Up Microsoft Windows Hard Disk Defrag Tips & TricksÂ .

I hope this guide help you learn how to pick software for your Netbook or older Windows XP, 98, ME,etc. Computer or laptop. If you have some good multimedia software, please leave a comment.