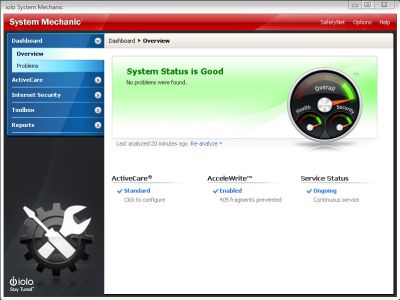 I been using iolo System Mechanic 14 for maintaining Windows 8.1 computer, and it has been pretty easy to use, and fast. It runs very fast even on my older desktop computer with a Intel Dual Core 1.8GHz CPU, 3GB of RAM, 320GB hard drive, and Nvidia GT620 1GB video card. The programs open in only a few seconds, and most scans and repairs like Deep Analysis only takes a few minutes to complete on my PC.  Iolo System Mechanic 14 is a good program for maximizing the performance, and reliability of older computers, and maintaining and improving the performance of newer computers. System Mechanic 14 also automatically checks for new versions, and update definitions, so you are always using the latest version.

There are also many easy to use standalone programs in System Mechanic 14 for manually defraging a hard drive, optimizing a SSD/Solid State Drive, checking and repairing drive errors, repairing the registry, optimizing free memory, checking the security of your PC, making your internet and network performance faster, and improving the overall performance of your computer.

System Mechanic 14 now comes with iolo LiveBoost which is a program where you can easily switch power plans, turn on Opticore which makes your CPU run better by freeing up CPU resources used by non-important programs, RAMJet which optimizes your RAM by freeing up unused RAM, and Accelewrite for increases the performance of your storage drives by minimizing its writing to the drive. There is also a setting called Idledown which will switch to a more energy-efficient power plan like LiveBoost Endurance after your computer is idle. It can also be set to automatically switch power plans when a program, or game is launched to maximize your PC’s performance, or save power.

There are tools in System Mechanic 14 which help you turn off un-needed background programs and services, and startup programs to free up more RAM, and CPU resources, so your computer runs faster.

The security of your Windows computer is better protected with System Mechanic 14 because System Mechanic checks if your computer’s antivirus like Windows Defender, and Firewall like Windows Firewall are protecting you from security threats like viruses, spyware, hackers, and other security problems. System Mechanic also has a built-in program called System Gaurd to protect your Windows settings like homepage settings and search engine settings from being change on Browsers. It also blocks dangerous programs from running, and gaurding your startup from running dangerous programs.

Iolo also has a Privacy Cleaner which cleans up junk files which can contain private information like browsing history on web browsers which you don’t want other users to see. There is an Incinerator program in Iolo which overwrite deleted files in the Recycle bin many times to securely delete them, so deleted files can’t be recovered easily with data recovery software.

Iolo System Mechanic 14 is a simple to use system utility program which makes maintaining a Windows computer a lot easier because most of the maintenance tasks like disk defrags, disk cleanup, disk scans, memory defrag, registry cleanup, etc are done automatically in the background while you are using your PC. Users can also easily maintain their PC with easy to use tools and software which are built-into System Mechanic 14.

Next post: Hyper Cache – A fast caching plug-in for WordPress which also work with mobile templates