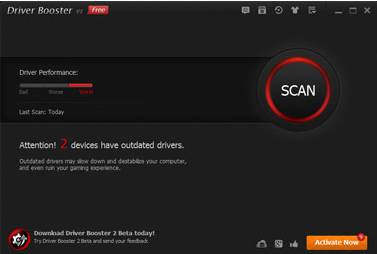 Iobit Driver Booster is a free program which is used for scanning your Windows computer for outdated drivers, and using the internet to download and install the latest versions of your computer hardware drivers.

By using the latest drivers for computer hardware, your games, Windows and programs could run faster, and crash less because newer versions of drivers fix performance and stability problems which are found on older versions of hardware driver. Sometimes video card driver makers also optimize their drivers to work better and faster on newer games.

I also like the red and dark black user interface of Driver Booster because it looks very modern and sleek.

I have been using Driver Booster for many months, and it has worked great at installing the correct version of the newest device driver for each device.

You can download Driver Booster for free at http://www.iobit.com/driver-booster.php

Next post: BruteProtect protects WordPress Websites and Blogs from Hackers and Bots