Tutorial on using the Raspberry Pi like a Desktop PC 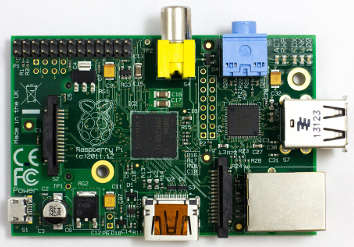 The Raspberry Pi Model B is an affordable $35 Linux based mini computer which you can use like a desktop PC with a monitor, keyboard, mouse, and speakers. Using the Pi as a desktop PC is affordable because the Pi, and the accessories are inexpensive to buy. The Pi also use very little power, and makes no noise, so the Pi is a good desktop PC for typing documents, watching video with TBOPlayer or Raspbmc, and listening to music. The Pi also has a lot of fun games like Quake 3, Minecraft Pi, OpenArena, etc, so it is a cheap PC for gaming, but powerful enough to play games like Quake 3 because of its 700MHz CPU, 512MB of RAM, and a fast video chip capable of displaying 3D and HD Video. Also, you can use the Pi for making programs because the Pi was originally designed to teach kids to program with Scratch programming language designed for beginners who want to learn programming.The Raspberry Pi is easy to maintain for a desktop PC since you are not vulnerable to the many virus and malware programs which infect Windows computers, and it is easy to backup the Raspberry Pi SD Card with Win32 Disk Imager which is a free program for backing up SD memory cards to a .IMG file in Windows. I notice the Raspbian operating system is very stable, and never breaks in my experience. The Raspberry Pi is fanless because it does not generate a lot of heat, so the Pi rarely overheats.

You can buy a Raspberry Pi Model B and accessories for the Pi from Newark/Element 14 .

Setting up the Pi to be used as a desktop PC is pretty easy.Â  You just need to have computer accessories like a monitor or TV, speakers, SD Card, Micro USB power adapter, and USB Keyboard and mouse. If you want to use the Internet on the Raspberry Pi Model B, you would need a Ethernet networking cable, or compatible Linux Wi-Fi adapter. You’ll need a case for the Raspberry Pi to protect it.

It is best to Pick a Monitor or TV with HDMI video ports for the Raspberry Pi because HDMI supports both video and audio outputs. Plus, HDMI monitors are usually widescreen monitors with higher resolutions like 720-1080P, so HD video will look better on a high resolution monitor and TV. The Pi has a full size HDMI port, and requires a regular size HDMI cable like Game consoles like the Xbox 360, Blu-Ray video players to connect it to your monitor or TV. You can also use a RCA composite video cable to connect your Pi to older TVs without HDMI.

If your monitor does not has speakers, or you are not using a HDMI cable to connect your Pi to your TV or monitor, you would need speakers with a 3.5 mm audio plug to connect the speakers to the 3.5 mm Audio port which is the blue or black port on the Pi.

I recommend getting a 8GB or bigger SD Memory Card with a performance ratting of Class 10 for the Raspberry Pi. 8GB should be enough space to install a lot of programs on the Pi. Class 10 SD Cards are faster, so you can startup your Pi faster, and your Pi open files and programs faster because of the faster performance of a Class 10 SD Card.

The Raspberry Pi only has 2 Full size USB ports, so you can only use a USB keyboard and USB mouse for typing, and using the mouse with the Pi.

There is also one Ethernet Port on the Raspberry Pi Model B to access the internet with a wired Ethernet connection. If you need to use a wireless connection to access the Internet, you need to get a USB wi-fi adapter which supports Linux. You may also need to get a wired USB 2.0 hub to share a USB port with your keyboard or mouse because the Pi only has 2 USB ports. I recommend you use a powered USB 2.0 hub because you won’t use too much power from the Pi’s USB port causing the Pi to have power related problems because of using too much power from the USB port. USB 2.0 is also fast enough where it does not slow down your Internet because USB 2.0 has a maximum speed of 480 Mbps.

After you installed the Raspberry Pi in a case, you can plug in your monitor with a HDMI cable,Â  USB keyboard, and mouse, speakers, Ethernet cable or USB wifi adapter and SD Card with NOOBS installed in it into the SD card slot on the Pi. Lastly, when you finish plugging everything in, you need to plug in your MicroUSB power adapter into the Pi, and plug in the power adapter into your Wall’s power outlet. After your Pi has started up, you would see the NOOBS installer which let you install one or more operating systems onto your Pi’s SD card. Once the NOOBS operating system installation is done, you can start to use the Raspberry Pi like a desktop computer. You may need to type sudo raspi-configÂ  to change the Boot Behavior to make the Pi boot into the desktop in Raspbian. You can also type startx in the command line to start the Raspbian Desktop.

Next post: WP Clean Up – Cleans unnecessary entries in your WordPress database to make it smaller