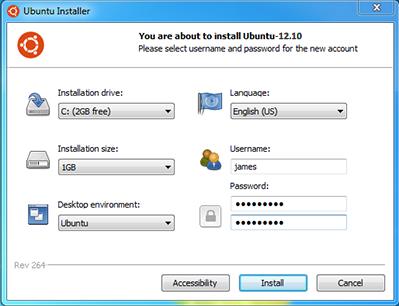 I recently installed Lubuntu 12.10 which is the lightweight LXDE destop environment which is designed to run on Linux based Ubuntu operating system. I used the WUBI.exe installer file which I downloaded from Ubuntu’s WUBI website. Wubi.exe stands for the Windows Ubuntu Installer program which is a simple program which downloads, set up the first admin user account for Ubuntu, and installs Ubuntu onto a virtual disk file inside your Windows computer’s hard drive. With Wubi.exe, you can easily make a Windows and Ubuntu dual boot computer. Ubuntu is a free, safe, easy to use, and feature rich Linux based operating system. Linux is a free operating system which anyone can use for free unlike Windows which is paid, and not free to use. Linux can also be used on older computers which are too slow for Windows 7, 8, Vista, and XP.

You don’t need to burn a DVD-R, or make a bootable CD to use Wubi.exe to install Ubuntu, so you can even install Ubuntu on Windows computers without a DVD/CD drive, or USB ports on computers from the 90s which have a 1GHz CPU, 384MB or more RAM, and 5GB of free space.

The default desktop Ubuntu install disc has a copy of Wubi.exe as well, so if you have a Ubuntu install CD, you can use wubi.exe from the CD to install Ubuntu on your Windows CD.

Wubi would not make any changes the MBR/Master boot file, and won’t partition Windows’ hard drive during the installation, so it is easier for new users to install.

You download Wubi.exe at the bottom of the page at www.ubuntu.com/download/desktop

After opening Wubi with an administrator account/first Windows account, you may need to hit the continue button on a Windows pop-up Window if you use Windows Vista, 7, and 8 to startup Wubi.exe.

The advantages of using Wubi is it is easy to use, and fast to install Ubuntu. The disadvantage of Wubi is Ubuntu disk performance is slightly slower than installing Ubuntu onto its own hard drive, or partition, and it uses some of your space on your Windows’ drives. But, with high performance SSD hard drive, and faster 7200 RPM-10000RPM drives with 64MB of Cache, the slight performance decrease won’t be noticeable after you defrag your hard drive after the installation of Ubuntu with Wubi. There is also no antivirus, and fewer programs which run in the background which could slow down Ubuntu because an antivitus, system utilities like disk defrag, registry cleaners, and antimalware are not needed in Linux because it is very hard for users to get infected by viruses or malware if they stick to using programs which they found and install in the Ubuntu software center. Plus, Linux drives do not need to be manually defrag.

Ubuntu installed with WUBI is slower than Ubuntu installed on a blank storage drive or partition on a drive. But, it would still perform faster than Windows 8, 7, and Vista on an older computer with only a 1GHz single core CPU, 1GB of RAM, and onboard video because Ubuntu has low recommended system requirements, and if you use Lubuntu or Xubuntu as the desktop environment, the system requirements are even lower than Ubuntu and Kubuntu.

I used a HP a1720n desktop computer with Windows 8 Pro to install Ubuntu inside of my Windows 8 drive.

I recommend backing up your files in the rare case that Windows crashes, or there is a power outage which may affect Windows, and it is always a good idea to backup your important files on a regular basis before installing any new software, or for safe keeping.

You need at least 5GB or more free space depending on how much space on your hard drive or SSD/Solid State Drive you want to use for Ubuntu.

I recommend 20GB or more if you plan to use Ubuntu as your main operating system. If you are short on space, 5GB would be good enough for Ubuntu to use as a web browsing, and office computer, but not enough space for games, multimedia, and other programs which can use a lot of space.

If you have more than one Partition, or storage drive on your computer, you can pick the storage partition or drive to install Ubuntu onto. Otherwise, your only option is C: drive.  For faster performance, I recommend you defrag your Windows hard drive before, and after you installed Ubuntu, or install Ubuntu on a SSD/Solid State Drive which has faster read and write time than all mechanical hard drive. SSD don’t need disk defrag like mechanical drives because SSD are purely digital like SD memory cards, and have no mechanical parts like motors, and read write heads.

Wubi has multiple Desktop Environments like Lubuntu, Kubuntu, Xubuntu, and the regular Ubuntu which uses the default Unity user interface.

I recommend the default Ubuntu since it is best to get used to the Unity interface since most Ubuntu PCs and mobile devices like tablets and smartphones use Unity.

If you want a lightweight operating system, Lubuntu or Xubuntu would be best for you since both Lubuntu and Xubuntu uses very little system resources like disk space, RAM, CPU, and video, so they run very quickly even on older computers.

Kubuntu looks like Windows, so it is good for people who are used to Windows, and don’t like learning new operating systems.

In Wubi, during the installation, you can pick different languages like  English, French,m and Spanish which Ubuntu supports.

There is also a Accessibility button for installing Screen readers if you are blind or visually impaired, and hard of hearing.

Once you filled out the Wubi.exe forms, and made your user account, you click the Install button which would download the version of Ubuntu like Lubuntu or Ubuntu, and automatically install Ubuntu on Windows. When it is done downloading Ubuntu, and doing other things, you need to restart Windows to let WUBI finish installing Ubuntu on your computer. When Ubuntu is finish installing, it will automatically restart your computer, and you can pick if you want to start your computer into Windows or Ubuntu.

During the Ubuntu startup process, your computer will be restarted, and show the Ubuntu boot manager also called GRUB which will list Ubuntu, and Ubuntu Advance Options. After a few seconds, Ubuntu will boot into Ubuntu, or you can click enter to skip the countdown.

When you are at the login screen for Ubuntu, enter your password you made during the WUBI install process. You should also update Ubuntu, and try to get yourself familiar with Ubuntu by exploring the different menus, settings, and desktop.

If you need to access your Windows files in Wubi, you need to open the file and folder management tool in Ubuntu, and type /host into a empty address bar, and click enter, and there are also shortcuts on the left side of the file and folder manager to explore the drives which are attached to your computer both internally with SATA, IDE, or SCSI, and externally via USB, Firewire, E-Sata, etc.

The Ubuntu Software Center is used to install and uninstall programs like Firefox, Libreoffice, and media players for Ubuntu.

If you want to book back into Windows, just restart Ubuntu, or shutdown Ubuntu, and turn on your computer, and press enter when you see the boot loader, and Windows will startup again.

It is also easy to uninstall Ubuntu installed with WUBI.exe. You just need to open add/remove programs in Windows from the control panel, or use a program uninstaller program like CCleaner, or Revo Uninstaller to launch the Ubuntu Wubi uninstaller, and your Wubi installation should be uninstalled afterwards, and Windows would remove the bootloader, and Ubuntu from your system.

You download Wubi.exe at the bottom of the page at www.ubuntu.com/download/desktop

Previous post: Using Ninite.com on Windows 8 to install multiple programs at once