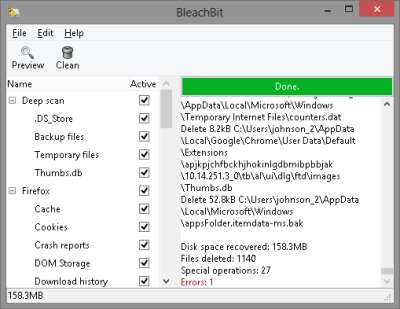 I have been using Bleachbit to clean junk files from Windows and even Linux computers like Ubuntu, and Linux mint for years. Junk files are files which are safe to delete.

One of the advantages of Bleachbit is it is fast, and easy to use. I just need to open it from the shortcut menu, and press the clean button after I checked the programs like web browsers, plug-ins like Flash for Web browsers, System temporary files,Â  and Windows Explorer junk files.Â  I can also click the Preview button to see what you are deleting with Bleachbit before you hit the clean button. The user interface in Bleachbit is very minimal, and just has a few checkboxs, descriptions, scrollbars, menu, and a few graphics, so it starts up quickly and run pretty fast. Bleachbit only uses about 5 MB of RAM and 0% CPU when it is running in the background not doing anything according to Windows Task Manager.

Usually, I get back a few hundred MBs to GBs of free space after I run BleachBit in Windows 8, and Bleachbit also quickly finishes the disk cleanup in a few seconds in Windows 8.Â  BleachBit also rarely crashes in my experience, and never deleted an important file which it is not suppose to delete.

Another advantage of Bleachbit is it is just a disk cleanup tool, so there are no other tools like registry cleaners which may break Windows sometimes if the registry cleaner is not very good, and Bleachbit file size isn’t as big because it does not have features which you don’t need for a Windows Disk Cleanup tool.

Bleachbit user interface is also the same for both Windows, and Linux, so if you someday switch to Linux you’ll know how to use Bleachbit in Linux since Bleachbit for Linux is like Bleachbit for Windows.

It also lets youÂ  add custom folders, and files to delete during Bleachbit cleanup, or exclude folders and files from the Bleachbit disk cleanup.

Bleachbit also has a file and folder shredder, and can be used to wipe free space to make files harder to recover because they will be overwritten by Bleachbit.

There is also a portable version of Bleachbit which you can run on your computer from a USB flash drive, external hard drive, or you can extract from the zip folder, and use at once without installation.

The install version is better for most users since it adds a shortcut to your desktop and startmenu for running Bleachbit in Windows.

The installer file is also only a few MBs in size for Bleachbit, and it is easy to install Bleachbit.

I also like that Bleachbit automatically notifies me when there is a new update for Bleachbit available on its website.