They are both easy to install in Windows 8. I just need to download them from Firefox.com and Google.com/chrome , and install them by double clicking on the installer file with my mouse. 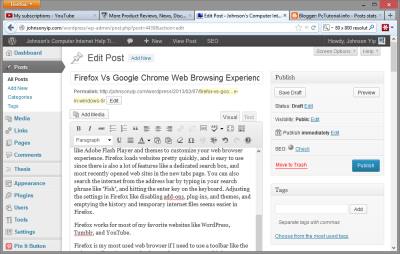 Firefox is a good web browser if you use a lot of toolbars like the Yahoo Toolbar, extensions like Facebook sharing extensions, plug-ins like Adobe Flash Player and themes to customize your web browser experience. Firefox loads websites pretty quickly, and is easy to use since there is also a lot of features like a dedicated search box, and most recently opened web sites in the new tabs page. You can also search the internet from the address bar by typing in your search phrase like “Fish”, and hitting the enter key on the keyboard. Adjusting the settings in Firefox like disabling add-ons, plug-ins, and themes, and emptying the history and temporary internet files seems easier in Firefox.

Firefox is my most used web browser if I need to use a toolbar like the Yahoo Toolbar since Google Chrome does not support third party toolbars, and Internet Explorer 10 seems slower when I load it up with a toolbar enable. I also don’t like the new user interface in IE10 since it looks kind of plain, and less modern.

I also like that it is easy to hide the tabs toolbar in Firefox in the settings, and if I want to, I can hide the Address/Navigation, Menu, bookmark, and other toolbars in the Options menu on the Firefox button.

Firefox is also easy to update since it notify you when new updates are available, and ask if you want to install the updates. 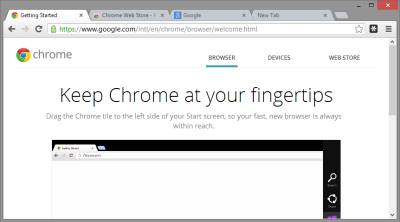 Google Chrome seems to start up a little bit faster and run faster. There are a lot of Extensions, Plug-ins, and themes for Google Chrome, but not many toolbars for Chrome. There also is not a dedicated search box which makes it easy for you to search with different search engines like Firefox. Although, the user interface in Chrome is more simple, and uses slightly less screen space then Firefox.

Google Chrome works good on almost all websites, and seems to work better on Google websites like Blogspot which sometimes take longer to load on Firefox than Google Chrome which loads Blogspot post editor/creator almost instantly.

Both Firefox, and Google Chrome is they both rarely crash and freeze in Windows 8 unless I have a lot of tabs opened, or you installed a lot of plug-ins, extensions, and toolbars which can slow down your computer and web browser.

I think it is best to have both Google Chrome, and Firefox installed on a computer since they both have pretty good features, and are easy to use.

You can download Firefox at Firefox.comÂ  Google Chrome at Google.com/chrome

Next post: Pokki brings back the Startbutton Startmenu to Windows 8 like Windows 7, adds a Web App Store to Windows 8