Ubuntu Linux 10.10 is one of the most popular Windows alternative operating system. It is also very easy and safe to install on a computer which runs on Windows. The Ubuntu Desktop install CD come with WUBI which is the “Windows Ubuntu Installer” which makes it possible for Windows to install Ubuntu just like any other Windows software on your computer.

Also, if you feel Ubuntu is not for you, you can use add/remove programs in Windows 7 Control Panel to remove Ubuntu like uninstalling other Windows software installed on your computer

Using WUBI to Install and Ubuntu on your computer is a lot easier, faster, and less troublesome then installing and using Ubuntu on a virtual pc software like VMware or Virtaul PC which run slowly on older computers with 1 Ghz CPU and 256MB of RAM when running a modern version of Ubuntu like Ubuntu 10.10. Ubuntu can use all the available CPU, RAM, and video card resources when it is installed via WUBI vs sharing system resources with Windows, Virtual pc software, and other Windows software.

Using Wubi to install Ubuntu on your Windows drive is also better then running Ubuntu from the Ubuntu start up CD or a flash drive. Ubuntu WUBI installs usually start up faster then a CD or flash drive, and Ubuntu save changes to your Ubuntu wubi installed you made like installing new software from Ubuntu software center, or changing the background which is usually lost if you use a livecd of Ubuntu or a start up flash drive pre-loaded with Ubuntu.

The System requirements for Ubuntu 10.10 are 1 GHZ CPU, 512 MB of RAM, 5GB of  free hard drive space and a video card and monitor capable of 1024x 768 resolution according to en.wikipedia.org/wiki/Ubuntu_(operating_system)#System_requirements .

1. You first need to download and burn Ubuntu to a CD or buy the CD from Ubuntu.com website.

4. Click the Install inside of Windows button in WUBI. 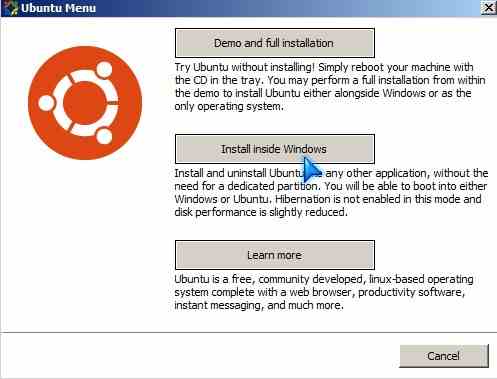 5. Pick the drive you want to install Ubuntu to, how much space you want to use for the installation size, Desktop environment, language, username, and password.

The Ubuntu files will be installed on a folder called Ubuntu on the drive letter you pick during the install.

I recommend you install Ubuntu with 10 GB or more of hard drive space since you might need the extra space for programs you plan to install on Ubuntu in the future. If possible, it is best to install Ubuntu on a separate partition or drive not on Windows since the Windows drive tends to get fragmented after time which may affect the disk performance of Ubuntu installed on it.

8. After you restart Windows, you’ll see a black screen which say Windows, and Ubuntu. Push the down arrow on your keyboard and press the enter key. The GRUB bootloader will appear. You can wait for grub to finish counting down or just click the enter key again to load into Ubuntu Linux 10.10.

Note: It is best to remove the Ubuntu CD before you restart your computer since some computers are set to start from a CD as it’s first start up device, so if the Ubuntu CD is still in the drive, you will boot from the CD instead of your hard drive which Ubuntu and Windows are installed on.

Ubuntu will now finish the installation of Ubuntu in Windows and it will ask you to restart your computer.

Congratulations, you now have installed Ubuntu 10.10 on a Windows based computer and created a dual boot computer.

I have been using Ubuntu 10.10 installed with WUBI. The main advantage is it starts up faster then Windows 7, and shut down is fast, too. If you use Firefox, using Ubuntu to browse the web will be the same as Windows. You can also use Ubuntu Software Center to install Google Chrome browser. Ubuntu 10.10 comes with most of the basic software like media players, instant messenger, office suite, and e-mail clients. If you need a specific type of software, you can browse or search Ubuntu Software Center for the type of software you need.  If you use Cable Internet or your computer is connected to your router via a network cable, you do not have to configure Ubuntu to go online. What I like most about Ubuntu is it is so fast, and I do not need antivirus, antispyware, and firewall software like Windows since there are barely any viruses which are easy to infect Linux like Windows which have tons of viruses. The user interface for Ubuntu is also very nice and well organized.

Ubuntu 10.10 is great as a home office computer, student computer, and internet computer for browsing the web. It is also good for playing media files like videos and songs. Ubuntu 10.10 is also a good choice if Windows got messed up on your computer by a virus, or spyware. It is also possible to boot into Ubuntu 10.10 and remove the virus from Ubuntu if you know where the virus is located in your Windows drive. If you can’t start Windows, you can use the Ubuntu Live CD or Ubuntu installed on your computer to recover your files.

There are a limited amount of games for Ubuntu, but it does means there are no games for Ubuntu Linux. All you have to do is use Ubuntu Software Center or the internet to search for games which are compatible with Linux, or use Wine to run some Windows games which are compatible with Wine.  You can also search Gaming in Linux, Linux gaming, Ubuntu Linux, etc on Youtube and other video sharing sites to see what other gamers who use Linux are playing on their Linux computer. The upside is all your favourite flash games like Farmville, Social City, Fishville, Fish Isle, Mafia wars should still work in Ubuntu after you use the Ubuntu software center or Firefox to install Adobe Flash Player.

The main advantage of WUBI Ubuntu 10.10 installs is it is easy to install Ubuntu, or remove Ubuntu if it is not for you. However, disk performance is slightly slower when copying, writing, and reading files because the Ubuntu install files is installed within Windows instead of its own drive or partition. Another disadvantage WUBI is it is vulnerable to virus ran in Windows which delete or rename all your files on your Windows drive since Ubuntu installed with WUBI is run in a virtual drive partition in Windows.

However, WUBI Ubuntu is still a lot faster then running Ubuntu Linux on an slower computer in a virtual machine like VirtualBox, VMware, or Virtual PC since you do not have to run Windows,  your Virtual PC software, and Ubuntu Linux all at the same time which can make your computer very slow if your computer can barely run Windows at a decent speed. Plus, WUBI Ubuntu also can see USB devices when you plug them in without configuring anything unlike virtualization software running Ubuntu. The visual effects are also available in Ubuntu WUBI by default which virtual pc ubuntu can’t run in most cases I experience. You also do not have to worry about the network adapter for your virtual machine getting corrupt in Windows which happen to me in the past. WUBI Ubuntu does not rely on Windows drivers for network and internet access. I notice Virtual machines sometimes make it harder for me to use my Microphone or webcam in Ubuntu since I need to tell VirtualBox that my USB device is installed before Ubuntu can recognize it. But, with Ubuntu Wubi install as long as my hardware works with Ubuntu Linux, it should work in Ubuntu without much configuration or tweaks like a virtual pc installed with Ubuntu.

Another advantage of installing Ubuntu with WUBI is that I can access my media files, photos, documents, and other files I stored in my Windows drive by going to a folder called Host in Ubuntu File System Drive in the Computer program in Ubuntu under the places  menu in the top tool bar menu . I can also access my other drives and drive partitions formated in Fat16, Fat32, NTFS, and other drive formats Ubuntu can recognize.  With a virtual machine, I usually need to change a setting, and add a shared folder to the virtual machine, so it can access my files. This did not always work in virtualbox, so I used a USB drive for VirtualBox to access files I copy onto from Windows. But, with WUBI Ubuntu install I can access all my files, folders, and drive on my computer after I installed Ubuntu on my computer.

Running Ubuntu installed with WUBI or physically installed on a drive or drive partition with the Live CD is the only way to experience the speed, simplicity, and coolness of what Ubuntu have to offer without a virtual pc software and windows making using Ubuntu more complicated then it has to be, or slowing down your computer.

The one major downside of using Ubuntu 10.10 for me is I can’t find a Digital TV recorder which is as easy to use as Windows Media Center or WinTV 7 by Hauppauge which came with my USB HVR-850 TV tuner. I found an app for Ubuntu for watching TV, but, I can’t find an app to schedule and record TV programs like WinTV or Windows Media Center. My printer and scanner did not work for Ubuntu, but it is not a big deal since I can still start up Windows  instead of Ubuntu to print and scan.

You can always uninstall Ubuntu from Windows add/remove programs in control panel. Start your computer from the Ubuntu install CD and remove Windows or make a Windows and Ubuntu  computer with both operating system from following  the wizard in the install cd. Be sure to back up your important files like documents, photos, etc before you install Ubuntu on your computer.

I been using Ubuntu installed with WUBI and it works great. Since the Ubuntu files are installed on Windows, it is a good idea to occasionally defrag and run scan disk on your drive you installed Ubuntu to with a Windows disk defrag program and scan disk program.