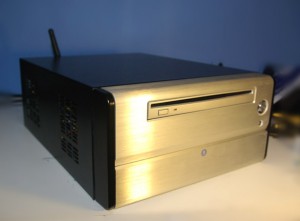 by Chris Lowry of allaboutchris.co.uk

For several years now, I have wanted an automated backup system for my home computers. Something that can keep track of a desktop and 3 or 4 different laptops, and keep all the files centrally stored for remote access, and media streaming.

Here I am going to take you through how I went about this, and how you can too.

Incidentally, I named my machine “The Boss”. After my wife.

There are four key stages

You need to ask yourself some questions:

What do you want your server to do?

I have five aims:

What do I need to achieve this?

Once you have organized the details of what you want, its time to actually chose what and where to buy your bits. I eventually decided, with some excellent advice from the guys at LinITX, who basically told me for free exactly what to buy, within my budget and to my specifications.

Here is what I ordered:

As a brief explanation for why I got what: Atom processors are very energy efficient, but the dual core should also give me any oomph that I need. 2GB of Ram is probably overkill, but it future proofs nicely. A 1.5TB HD is nice and big, and should last me several years. The NOAH case is small, robust and well priced, and I decided to have Wifi as well as Ethernet to give me more options in the future. Obviously, for large scale transfers I will mostly be using cable.

In the end, I shopped around a little, but still bought the key items from the LinITX store. I can also recommend Mini-ITX.com and ITX warehouse. My final total came to £320.98. Not bad!

Now comes the exciting bit. The payment is made, the days have passed, all the exciting boxes have arrived. It is now time to build your new server. 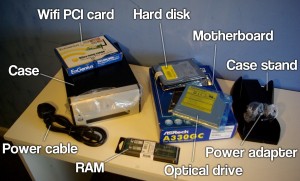 1. Get your kit together

Open up all the boxes, get all your kit into one place. You are also going to want a very small flat head screw driver, and a variety of sizes of cross heads.

Listening to Punk Radio Cast continuously whilst doing it might be a plan also.

Your motherboard comes with a manual. You are now going to read it. This is pretty important, 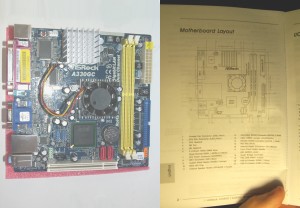 so take 5, and check it out. The most important page is the one at the front (usually), which details what is what on the motherboard.

There is also a guide for the best way to build your machine. I have slightly altered it due to constraints due to our case, but this can give you very helpful advice if you get confused.

3. Get the motherboard out

Whilst you are doing this, you should take a little care to get rid of static. The easiest way to do that is to go touch a tap, since metal taps are connected to the water main, and thus earthed. You do not want to accidentally put a spark into your new PC. I generally pop to the bathroom and destatic myself every 20 mins or so during PC building.

Anyway, pop the motherboard on the table, and compare it with the manual until you know what everything does. You are ready for the next step, which is 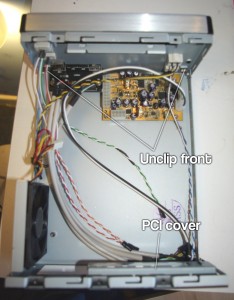 4. Work out how the case works

Look at the case intently, from the front, from behind, from above, from the side.

Play around, unscrew bits, take bits off. It is a lot easier to do this before you put the motherboard in, and there is nothing more annoying than, when putting in the final component realizing you need to unscrew something that is only accessible by taking everything else out.

I would remove the cover to the PCI hole on the case now (I forgot when I did mine, and its a pain in the bum see this picture!), remove the drive tray on top (see point 16), and unclip the front of the case, in order to unscrew the plate covering the port for the optical drive. 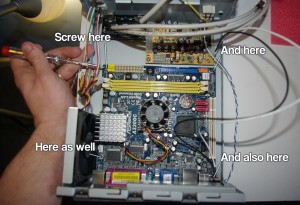 5. Chuck in the Motherboard

Carefully, and non-statically, place the motherboard in, making sure not to get any cables caught under it.

Put in screws at the corners delicately: don’t put them in too tight otherwise you might damage the board.

It’s more fiddly than difficult. A magnetic screwdriver is very useful on the 19 occasions you will drop the tiny screw down the cable between board and case. 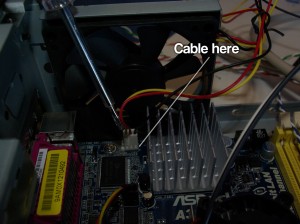 6. Plug in your first cable!

This is the power for the fan for the CPU. You should see how the manual in step one tells you exactly what should be plugged in here.

I put it in first for two reasons. Firstly, its very small and fiddly, and will be hard when there is other stuff in the way. Secondly, the manual tells you to.

I’ve got two sexy sticks of ragingly fast 533MHz DDR2 RAM (for fast, read slow, but power efficient). You need to pop them into the sockets, and push pretty hard.

Very hard in fact. Check carefully they are in right, with the gap lined up with the RAM and the socket, then push just slightly harder than feels comfortable considerspringinessingyness of the motherboard.

When they are in, there will be a click, and the white clips will hold the sticks of memory in place. Now it won’t fall out when you take it with you on that bungee jump you keep meaning to take a server with you on. 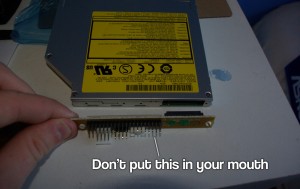 8. Put your optical drive together

This system needs an optical drive; since installing operating systems is effort on other media, and, you never know, this may end up as a kitchen media player at some point.

The slimline DVD drive here (read slimline as slow, but tiny, and power efficient) connects with the old school IDE cables, and thus needs this weird looking converter attached. So go attach it. I was pretty worried that this wasn’t there at first, I even rang LinITX, but eventually I found this weird little plastic bit, and my worries ceased. 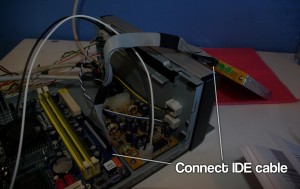 Plug in the IDE cable

You need to plug the IDE cable into the back of the optical drive, and into the motherboard. Its pretty obvious, just make sure you get it the right way round.

Now make sure that the drive is out of the way so you can still get at the motherboard. Don’t worry about the power cable yet, that comes later. 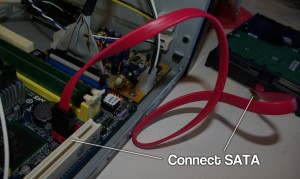 The SATA interface is much more modern than the old IDE setup: the cables are smaller, easier to fit, and much faster. I definitely wanted a fast hard disk access, so SATA was the way to go.

Once you have it in, move the hard disk out of the way, as with the optical drive. 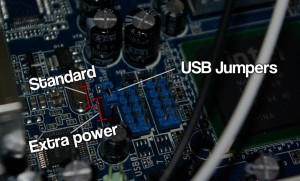 Sort out your jumpers

Jumpers are basically a little manual switch on a motherboard. They used to be a lot more prominent when using drives, having to set which ones where theMaster orSlave. SATA has made that a thing of the past, and it is now just used for a few bits and pieces.

I am also not 100% whether the inbuilt power to the case would be able to support the extra power draw. Fairly certain it would be fine, but still. 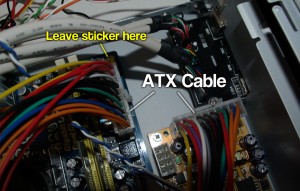 That title heralds the introduction of our chunky ATX power cables. We leave this until towards the end as it starts making stuff messy. Simply take the large cables and plug them in, one side into the PSU (power supply board), the other into the motherboard.

The thing to confuse you is that the motherboard socket is designed for 24pin power, and our lead is only 20pins. This is fine, simply leave the yellow For 24 Pin Connector sticker in place, and just use the remainder of the socket. 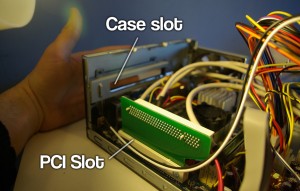 When I first looked at my PCI wifi card, I was a little worried, because plugging it in straight was not going to fit in the box. Then I discovered that the awesome folks at LinITX provide a convertor that turns your PCI slot 90 degrees, and lined it up neatly with the case slot.

Simply take it and plug it into the PCI slot. You shouldn’t have to push as hard as with the RAM. You should take a moment just to appreciate how annoying it would be to have to remove that case slot cover now, rather than in step 4 when I told you to. If you want, you can see a picture of me having to do just that, with a screwdriver *through* the CPU fan. 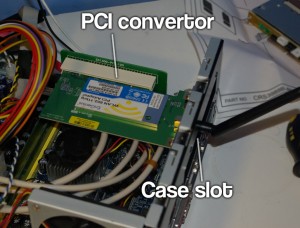 Fiddly, but not difficult, you are now going to plug in your PCI card. Its fiddly because you have to get it through the case slot, and into the PCI extension, and screw it in place.

But I’m sure you can manage, and I have great faith in you. I dropped screws at this point about 6 times. Irritating, but I managed to get it in eventually.

We are nearly don! 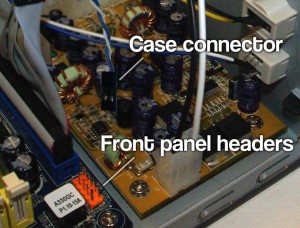 I am afraid I haven’t got a perfect photo for the audio and case power connectors, since its hard to take without seeing it from 6 angles, but they are your next attachment. It is quite simple, find the labelled leads, and plug them in according the instructions in the manual.

Each case will have differently labeled leads, but it is usually simple to work out. If you get it wrong you will know, because later on, when you press the On button on the motherboard, the PC will turn on. If you’ve got it wrong, those buttons won’t work yet.

The sound headers are the same: if you end up with sound, you probably got it right. You won’t damage your board getting these the wrong way round. 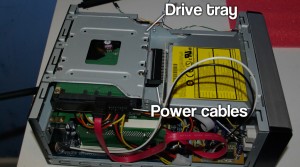 The HDD fits more easily, although it will only fit one way round due to the protruding cables. Once you have that in place, you can screw the drive tray down, although I would recommend leaving it until you know that everything underneath is working fine. 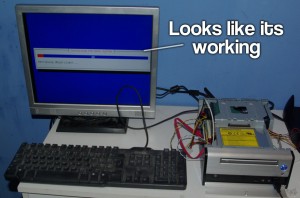 You can now try it out. Plug in a keyboard, mouse, monitor and power cables, and let it roar. Frankly, if it turns on, you have probably got it right, but I chose to install my operating system straight off, to check if the wifi card and optical drives were working. You can also do this to check the sound.

However, more about OS stuff in the next installment of this tutorial. If it’s working, you can move onto the final step 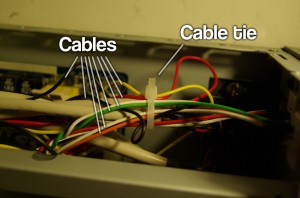 18. Tidy your cables, and put the cover on

Because it is a very tight fit inside the case, protruding wires will make it difficult to get the top on. You also want to make things neater, and reduce the risk of accidentally unplugging something, so get some cable ties, and bundle together your cables.

Now chuck the cover on top, and Voila!

you’ve built you a server. You can probably stop listening to the punk radio now as well.

That’s enough for now. To find out about what software I used, you will have to wait until the next article. Keep your eyes peeled for Part Two!

Thanks, Chris for writing such a great articlw on Building  a home backup server for backing up files to another PC.