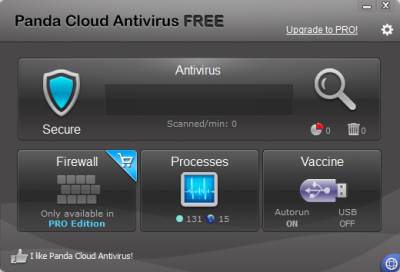 While Panda Cloud Antivirus is running, It does not slow down my computer when I am using it like other antivirus programs. According to Windows Task Manager it only usesÂ  0.6MB of RAM, and 0% CPU system resources when running in the background protecting my computer. Panda Cloud Antivirus is a great antivirus for Windows 8 users who only meet the minimum requirements for Windows 8 CPU and RAM which is 1GHz CPU and 1GB of RAM, and for Windows users who don’t want to be slowed down by their Antivirus program while using their computers.

I use Panda Cloud Antivirus on a Windows 8 computer with 1.86GHz CPU, 1GB of RAM, and a 320GB hard drive, and Panda Cloud runs great on it.

It seems faster than other cloud based antivirus I used. The optimize virus scan also only take a few minutes to complete in Panda Cloud.

I like that Panda user interface is simple, I just click the Panda head icon on my system tray to launch Panda Antivirus, and click on the magnify glass icon to start the scanning program to pick aÂ  type of scan like Optimize, full or custom scan I want to do, and click scan.

There is also an optional security toolbar for Firefox and Internet Explorer and link blocking program built-in to Panda Antivirus to protect your computer from dangerous websites by blocking them with Panda Link blocking app.

Panda also disable auto-run USB drives to protect you from auto-run viruses, and there is also a Task/Process monitor built-in to Panda to tell you if there are any unsafe programs running in your computer’s memory.

It is also possible to setup Panda Antivirus to exclude certain files, and folders from your virus scans, so it does not accidentally quarantine your homework, work, or personal files. Although, Panda rarely mistake safe programs as viruses in my experience.