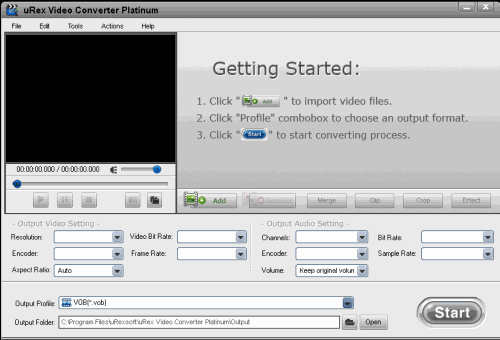 I have been using uRex Video Converter Platinum to convert a few videos to different video formats to playback on media players which do not support some video file formats like MP4. uRex video converter is very fast in my experience because of its support for  my newer multi-core CPU. It can convert video files to many different video and music formats like AVI, MPEG, WMV, DivX, MP4, H.264/AVC, AVCHD, MKV, RM, MOV, XviD, 3GP, and audio MP3, WMA, WAV, RA, M4A, AAC, AC3, OGG for playback on different devices like the iPod Touch, iPhone, iPad, Sony PSP, PS3, Nintendo Wii, Microsoft Xbox 360, Apple TV,  cell phones,  Google Android Tablet devices, and other video devices and game consoles which can playback video.

Most computers these days can also run it since the minimum requirements are low by todays standards.

You can also use uRex Video Converter Platinum to do simple Edit, split and merge video while converting your videos, so you can save time by not having to do minor edits to your video in a video editor like Movie Maker, iMovie, or Final Cut Pro.

I like that uRex can convert video to MP3 and audio format. This means I can download music videos, lectures, and video with audio to my computer, and use uRex Video Converter platinum to make custom music, podcasts, and sound effects.

The user interface for uRex video converter is also very easy and straight forward. It is very easy to pick the video and sound format you want to convert your video to, the bitrate, sound and audio quality of your video, so you can convert your video to a higher quality setting for playback on your computer, HDTV or laptop, or save space by setting the video and audio setting slightly lower to make it easier for you to upload to YouTube, your MP3 player with limited storage space like 4GBs or less.

You can check uRex Video Converter out at urexsoft.com/video-converter-platinum/

urexsoft.com/giveaway/johnsonyip-converter.html is having a giveaway for uRex Converter Platinum for readers of JohnsonYip.com