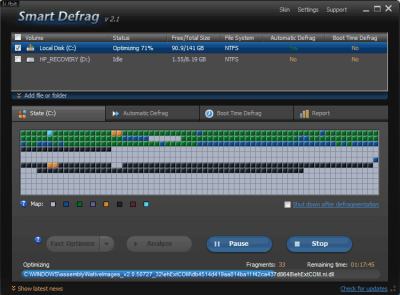 I have been using Iobit Smart Defrag 2 free version for a few days, and it works great. All you have to do is install Smart Defrag 2 on Windows, and let it run in the background, and it will automatically defrag your computer hard drives when your computer is idle meaning it is doing nothing, or when it is not using much system resources like CPU, RAM, and hard disk activity is low.

The user interface for Iobit SmartDefrag 2 looks very modern. I like the dark black, grey, and blue text theme for SmartDefrag 2 because it looks very modern, but it is easy to use. You can also change the Transparency, the colors if you have problems seeing the current theme, and the language is also changeable if your native language is not English.

Iobit SmartDefrag 2 also have manual disk defrag options like Defrag only, Defrag and Fast Optimize, and Defrag and Fully Optimize. Defrag move file parts to be closer together, so your hard drive’s head won’t have to move to multiple locations to read a single file. Optimizing a hard drive will move your files to the fastest parts of your hard drive for faster file reads.

Smart Defrag 2 also has an analyze feature which lets you analyze your drive to see if it needs a disk defrag or not if it does needs a disk defrag, SmatDefrag 2 will recommend what type of disk defrag your computer needs, and you can click the link in the disk defrag Report in SmartDefrag 2 to defrag your hard drive. The disk analyze report also tells you the names of the files which you need to defag, number of fragments per file, size of the fragmented file, and its location.

The Disk Defrag speed is pretty fast in my experience since it only takes a few hours or less to defrag my hard drive in most cases. There is also a countdown counter on SmartDefrag 2 to tell me how many remaining hours, minutes and seconds are still needed to finish the disk defrags the remaining fragments.

The Automatic Defrag running in the background also does not slow down my computer since it only runs when my computer is idle, and not doing anything. It is also very easy to disable automatic defrag and SmartDefrag 2 start when Windows startup option in the settings. The Automatic Defrag tab in SmartDefrag 2 has info about your computer’s CPU and disk usage, how many files were defrag on each day of the last 7 days.  Iobit also makes it easy for you to configure when you want S,artDefrag 2 to start automatic defrag after your computer has been idle for a certain amount of minutes, and don’t auto defrag when the CPU level is higher then a certain percentage. In the settings, you can also tell SmartDefrag 2 to exclude certain files, and skip larger files during the defrag.

SmartDefrag 2 also has a boot time defrag option which lets SmartDefrag defrag system files like the hibernation file, pagefile, Master File Table and other system files which Windows can’t defrag during Windows regular operations, but can defrag during computer startup with SmartDefrag. You can change how frequently like every boot, every first boot, just this time, every 7 days you want to do a boot time defrag in the Smart Defrag 2 settings for Boot Time Defrag.

Iobit’s SmartDefrag 2 is great for someone who wants to use a free automatic disk defrag which will  automatically defrag your computer hard drive for optimal performance while having the option of turning off the automatic defrag in the settings startup option, or going to the SmartDefrag 2 system tray icon, and right clicking the icon to pick exit to close the program. SmartDefrag2 is probably best for Windows file, e-mail, and print servers which don’t get much user interaction, but a lot of use where disk fragmentation can be a problem since no one manually defrag the hard drive. Iobit Smart Defrag 2 is also great for all users who need a free disk defrag which can automatically or manually defrag a hard drive to keep their computer hard drive at its best.