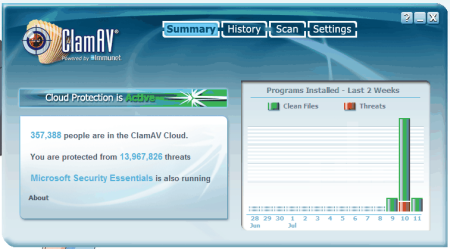 ClamAV for Windows is powered by Immunet Cloud based Antivirus which use the collective power of other users who are connected to the internet and use Immunet or ClamAV for Windows antivirus  to protect a computer.  It can also work a long side your current antivirus like Norton, Mcafee, AVG, Avast, MS Security Essentials, and other antiviruses. You can also run it as a stand a lone antivirus, but if you lose your internet connection you won’t be protected from viruses from USB drives, or CDs. 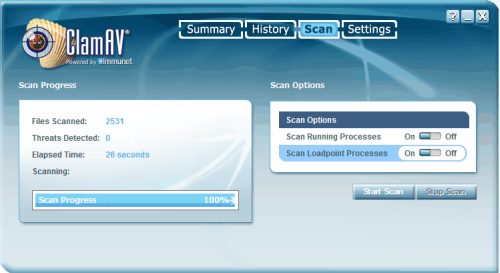 ClamAV for Windows only has Flash scan while Immunet’s original Cloud antivirus now has full scan which scans all your files for viruses. While Flash scan only scans your computer for active viruses which are already running on your computer. Flash Scans only take a few seconds or minutes depending on how many programs you are running on your computer at once and how fast your PC is. A flash scan only took about 26 seconds for me. Both ClamAV for Windows and Immunet have a real-time shield which protects you from over 14 million threats like malware, viruses, spyware, etc. ClamAV by using the collective power of its user base which is almost 400,000 users . ClamAV and Immunet both uses heuristics behavioral analysis which find threats, but Immunet has more features for settings for scanning. ClamZV for Windows powered by Immunet is the perfect antivirus for Netbooks, and low end computers, and can give enhance protection when run a long side another Antivirus program like Norton, or Avast 5 Antivirus, 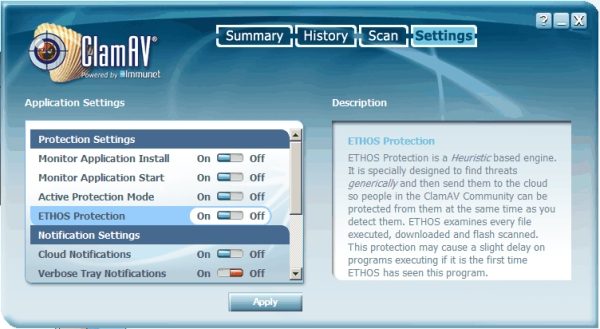 ClamAV for Windows is good for people who need a second antivirus for enhance protection and gives a second opinion on if the file is a virus while Immunet is almost the same as ClamAV for Windows, but has more features and settings which might confuse computer newbies. Although, both ClamAV for Windows and Immunet are incredibly easy to use. I tested Clam AV for Windows with Avira’s Antivir, and Microsoft Security Essentials, and they both work well with ClamAV for Windows powered by Immunet and did not cause any noticeable slowdown on my computer with 1GB of RAM and an Intel 1.8 GHZ CPU processor running Windows 7 Home Premium 32bit edition. I also ran Immunet orginal version with the fullscan on my Laptop with 4GB of RAM and a AMD 1.8GHz CPU and it did not slow down my computer during a full scan.

Immunet uses only 29.6MB of RAM and almost no CPU resources according to Windows Task manager. If you don’t download many unknown e-mail attachments, and visit unsafe website. Immunet might be the best Antivirus for your Netbook or older computer when Combined with a Sandbox program like Sandboxie, or Comodo firewall with a built-in sandbox program and Defense+ 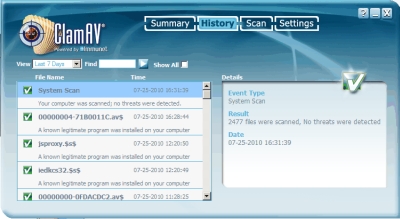 Immunet is a great antivirus for all types of computers from slower netbooks to high end gaming computers since you do not have to update it manually or do anything, but run it which happens automatically when Windows starts up. I been using it for a few weeks and it uses so few system resources. I can’t tell it is running in the background protecting me from 14 million threats by using the collective power of its user base which is almost at 400,000 as of July 25, 2010.

I recommend running a Flash Scan once a week with Clam AV for Windows or Immunet, and run a full scan of your computer on a weekly basis with your regular Antivirus, Anti-spyware/malware and Immunet if you are not using Clam AV for Windows, but using Immunet which you downloaded from Immunet’s homepage.

Tell every Windows XP and Above user you know about Immunet and ClamAV for Windows, so that we all can be protected from the 14+millions of threats on the Internet today.